Data Visualization is a broad topic and a buzzword that can mean a lot of things. . . and often be misconstrued or misunderstood. But in its essential form, data visualization allows us to take advantage of how our brain maximizes information processing – visually. When we hear something, we get about 10% or so of our brain involved. When we see something, that number jumps to roughly two-thirds of our brain power. We simply process better visually. But there’s a difference between processing visually like this. . .

And then seeing it in graphic form, like this.

The first makes your brain do some extra processing. You essentially convert the numbers in your head to do comparisons whereas the visualization makes comparison obvious, so your brain draws conclusions considerably faster. If you want to see an example of this, put some people in a room. Show them the first chart for three seconds, then hide it. Ask which value was the highest and which was the lowest. Then repeat again with the second chart. You’ll see much better retention with the second. If you want even better retention, then you could show the chart sorted, like this (also visually cleaned up a little).

That is the power of data visualization in a nutshell – helping the viewer process and retain the important information faster and better. With that as an intro, let’s dig into the main point of this article – how to use your data to communicate better.

What do you want your audience to remember?

Everything else builds from there. Let’s work with the example I’ve given on grants by program. Maybe my audience is my board and I want them to remember that our biggest grant impact area is Education. If that’s what I want, I can add some emphasis to my graph and make it stand out, like this.

Or, perhaps my audience is comprised of potential funders and I want to illustrate the gap between education and mental health. Now I may want to change it to something like this to show the gap.

The point is, that I am tailoring the view to what I want my audience to notice and retain, and so their attention is immediately drawn to that area of the visual.

This is your starting point. Once you know what you want them to remember, then you need to design your visual in a way that makes your point. Let’s cover some of the do’s and don’ts on that front.

1. Keep your chart clean. Avoid grids and extra lines and values unless they help you make your point. Most of the time in a visualization, it is the comparison that matters, not the exact value. If the exact value is important, then try to embed it in your graphic. For instance, in the education to mental health example, I could edit it to look something like this. 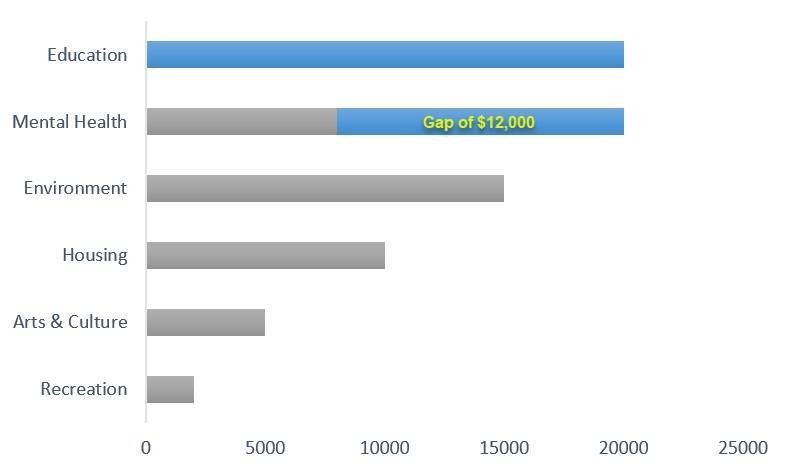 This way the audience doesn’t have to do any math and the value is called out with minimal clutter.

2. Stick to simple graphics. Unless your audience is very specialized (like a financial analyst or statisticians) where particular specialty graphs like scatter graphs are widely used, keep it simple. Bars and lines are universal and will tend to be the best at communicating important information quickly.

DON’T
1. Don’t overuse color. Color quickly distracts and certain colors (like red) will convey a message you may not intend. Aim for a fairly monochrome image and then use color to highlight the memorable part.

2. Don’t use 3D and especially not with pie charts. 3D distorts the comparison. It looks pretty and has a definite “ooh, ahh” experience, but it distracts from the comparison because the eye does not take in 3D well on a flat surface.​​

Should I use a pie chart?
This question causes some debate. The short answer is - avoid it if you can, but sometimes there will just be people who insist on it - so if your audience demands it, cater to your audience. There really are two big downsides to a pie chart that a column chart eliminates. The first is a comparison of close numbers. It can be hard to tell the difference between two or more slices that have close percentages, whereas a sorted column chart tends to make this more obvious. Secondly, a pie chart looks like a closed system. So if we did our first graph as a pie, it looks like this.

Which is bigger, environment or education? It’s far more obvious on the bar. And if we are trying to communicate that we want to grow mental health funding, there is a subtle visual message that to grow one piece, another has to shrink. The bar chart has the implication that each bar can grow independently. If these two aren’t barriers to what you’re trying to communicate, then the pie chart can still work. But if you can avoid it, then definitely do so. (And always avoid its ugly sibling – the donut chart.)

1. Know what you want your audience to remember

2. Determine the best way to show that visually

3. Build a clean, minimalistic graphic that shows it

This gives you a quick introduction into the first goal of data visualization. In future blogs, we’ll get more into topics like dashboarding and how to convey information for analysis instead of communication. And as always, happy to hear from you what questions you have around managing and displaying your data. Thank you!